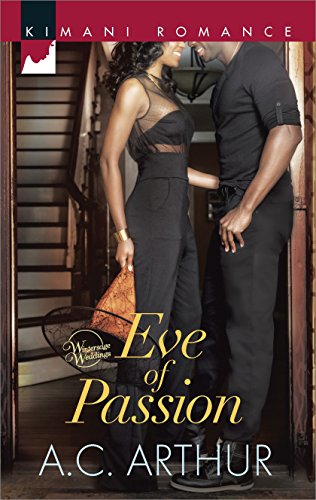 Eve of Passion is book 1 in a 3-book series, The Wintersage Weddings, each written by three different Harlequin Kimani authors. Book 1 is written by A.C. Arthur, a new author I’ve not read before, but I thought she did a pretty good job with this book overall.

Eve of Passion was a quick and easy read, which felt in the similar vein of most Harlequin Kimani romances I’ve read. It’s a billionaire romance kind of story, though both the heroine (Janelle) and the hero (Ballard) are both pretty well off. Janelle owns her own business as an event planner, part of the Silk Sisters entity with her two other close friends. She’s not big on romance after her last failed one, and had decided to move on with her life doing what she loves for her business. But her father who is a political figure, is hoping to get a little help with his campaign by rubbing elbows with the highly esteemed celebrity Ballard Dubois, so he persuades Janelle to talk to him. As you can imagine, that ‘talk’ ended up blossoming into a full-on relationship. The story focuses a lot on the relationship, though I felt the relationship itself was rushed a bit, almost insta-love. I understand the length constraints of the story, but I would’ve wanted to see a little more fleshing out and feeling a bit closer to the characters.

Things in the story happens very fast, and even toward the end when Ballard proposes to Janelle. And Janelle accepts. But then, the “rushness” seems to be justified when Ballard admits his forwardness and being unsure about the choices he made leading up to this situation.

Janelle was a likable character whom I could certainly connect to at times. I enjoyed reading per POV. Ballard, however was a little off for me. He was more of an average kind of guy, personality-wise. Kind of boorish at times. There didn’t seem to be anything about him that made me feel like he would be “book boyfriend” material. Sometimes I didn’t care about what happened to him.

The love scenes were hot and written well, but because I wasn’t really feeling good vibes from Ballard, I felt the scenes didn’t help me to further connect with the couple on a personal level in terms of their relationship.

Overall, the story was good, and the ending, though ends in an HEA, also leads you into book 2, which I will be reading next.